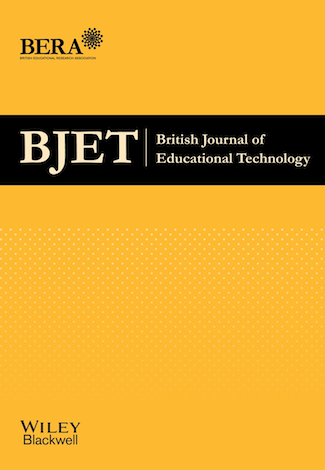 A cross-cultural examination of the impact of social, organisational and individual factors on educational technology acceptance between British and Lebanese university students
ARTICLE

This paper examines the social, organisational and individual factors that may affect students' acceptance of e-learning systems in higher education in a cross-cultural context. A questionnaire was developed based on an extended technology acceptance model (TAM). A total sample of 1173 university students from two private universities in Lebanon and one university in England participated in this study. After performing the satisfactory reliability and validity checks, the hypothesised model was estimated using structural equation modeling. The findings of this study revealed that perceived usefulness (PU), perceived ease of use (PEOU), social norms (SNs), perceived quality of work life (QWL), computer self-efficacy (SE) and facilitating conditions (FC) are significant determinants of behavioural intentions (BIs) and usage of e-learning system for the Lebanese and British students. QWL, the newly added variable, was found the most important construct in explaining the causal process in the model for both samples. Differences were found between Lebanese and British students with regard to PEOU, SN, QWL, FC, SE and actual usage; however, no differences were detected in terms of PU and BI. Overall, the proposed model achieves acceptable fit and explains for 69% of the British sample and 57% of the Lebanese sample of its variance which is higher than that of the original TAM. Our findings suggest that individual, social and organisational factors are important to consider in explaining students' BI and usage of e-learning environments.